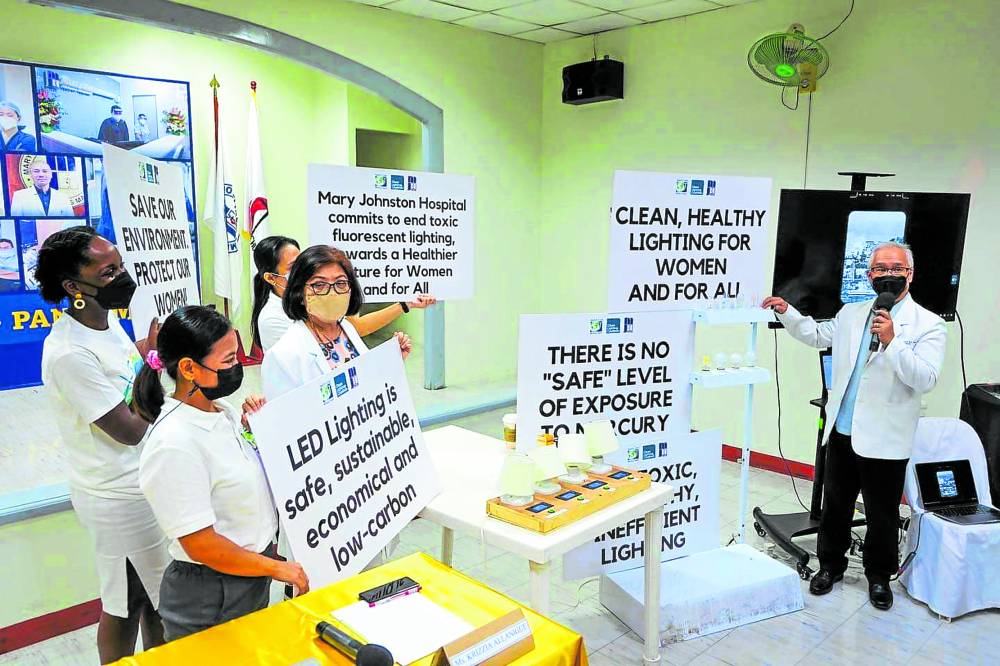 The 115-year-old Mary Johnston Hospital (MJH) in Tondo, Manila, shows the way in lessening not only its electricity expenses but also its carbon footprint.

In four years, it managed to save around P9.2 million in its power bill by retrofitting with LED lighting technology and, at the same time, make progressive strides in the worldwide effort to cut carbon dioxide (CO2) emissions and phase out the use of mercury.

“We have saved P192,330.90 per month on our electricity bill—or P9.2 million in four years—equivalent to approximately 883.78 tons of CO2 emissions which were prevented from being released to the environment,” Dr. Glenn Roy Paraso, MJH executive director, told the Inquirer.“Lighting is 20 percent of our total electricity expenses. We have shifted 80 percent of our lights to LED,” he said.

According to Paraso, since 2018 the hospital has replaced some 1,400 of its fluorescent bulbs with LED bulbs that are said to last two to three times longer and, more importantly, do not contain toxic mercury.

It has also gotten rid of other mercury-containing devices, like sphygmomanometers (blood pressure monitors) and thermometers, he said.

MJH partnered with Healthcare Without Harm (HCWH) and the Clean Lighting Coalition to eliminate the use of mercury by transitioning to 100-percent LED lighting.

It pledged to do the lighting retrofit in response to a call to end the use of toxic mercury lighting for a safe and healthy environment in the mother-baby-friendly facility.

“We’ve been changing them slowly and now, this partnership will help us replace all of the hospital’s fluorescent lights with LEDs,” Paraso said.

The initiative is part of the global call to amend fluorescent-bulb exemptions in the Minamata Convention on Mercury to be negotiated at the fourth Conference of Parties (COP4) this month in Bali, Indonesia.

Delegates from more than a hundred countries are expected to discuss, among others, a possible global ban on fluorescent lighting.

The Minamata Convention is the first legally binding treaty on the phaseout of mercury, a highly toxic substance that poses threats to human health and the environment.

There are proposals seeking to discuss its fluorescent-bulb exemptions, per the European Council for an Energy-Efficient Economy.

The treaty came into force in August 2017. The Philippines is among the 128 countries that signed it in 2013, and the 123rd country to ratify it on July 8, 2020.Mercury is listed by the World Health Organization among the top chemicals of major health concern. Exposure to it may cause harmful and possibly fatal effects on the nervous, digestive and immune systems.

Apart from hospital devices, other primary sources of human exposure to mercury are dental amalgams and gold mining activities.

“Exposure to mercury—even small amounts—may cause serious health problems and is a threat to the development of the child in utero and early in life. Women, pregnant women, are the most at risk of exposure to mercury,” Paraso said.

He explained: “When a fluorescent lamp breaks, it releases elemental mercury which contaminates the atmosphere, land,and water. When inhaled as a vapor, mercury can be absorbed by the lungs, migrate to the brain and damage the central nervous system.”

Coal and other fossil fuels on which most health facilities and energy sources are dependent are a major pathway of mercury into the environment, he added.

“Here in the Philippines, MJH is our pilot hospital,” Allanigue said. She said the project could be expanded to other health-care facilities nationwide, “so that they, too, can take concrete actions to eliminate mercury sources in their facilities and decarbonize their operations.” “The health-care sector, in eliminating risks to the environment to protect human health, conveys a deeper commitment to its mission to ‘do no harm,’” she said.

HCWH Southeast Asia director Ramon San Pascual said switching to LEDs and eliminating exemptions for fluorescents in the Minamata Convention would remove 232 tons of mercury pollution from the environment, both from the lamps themselves and from avoiding coal burning in power plants.

“It will also save 3.5 gigatons of CO2 emissions. This journey we take with Mary Johnston Hospital and the Clean Lighting Coalition means taking real action to decarbonize operations and transform the health-care sector to become safer, healthier and more equitable for women and for all,” San Pascual said in a statement.

HCWH earlier urged the public and private actors in the health-care industry to work toward lowering the sector’s carbon footprint, stressing the link between the climate crisis and human health.

HCWH analyzed the carbon emissions of health-care sectors in 68 countries to determine their shares of global emissions, using latest available data from 2014 and 2015. In Southeast Asia, it looked at Singapore, Malaysia, Indonesia, Thailand, Vietnam and the Philippines.

Per its report, the Philippines’ health-care system emitted some 5.22 million metric tons of CO2, ranking 36th among 68 countries in terms of gross emissions.

Fossil fuel combustion was the dominant source of emissions, comprising 84 percent across facility operations, supply chain and the broader economy. It includes the use of coal, gas and oil to power hospitals, travel related to health care, and the manufacture and transport of health-care products.

Apart from shifting to LEDs, MJH, a member of the GGHH Network, has also taken steps toward greener and more equitable health care by installing a solar panel system and reducing nonessential single-use plastics in the facility.

Paraso said savings from shifting to LED lighting and solar energy would help the hospital meet the health needs of its indigent patients.

In a post on its Facebook page, MJH said: “The solar panel system is expected to produce 10,217,659 kWh (kilowatt hours) of solar-generated electricity in 25 years. The total value or cost of the electricity that will be produced is P114 million. This is the amount that the hospital will be saving. Without the system, MJH will have to pay a total of P288 million in electricity for 25 years.”

“Over the same period,” it said, “the solar panel system is expected to prevent the production of 596 metric tons of sulfur dioxide which is the leading cause of acid rain, and 24 metric tons of nitrous oxide which is the main cause of smog. In the meantime, the oxygen that the system will be protected will be equivalent to the production of 89,750 hectares of forests.” Don’t miss out on the latest news and information.