Radhe Shyam’s newly released trailer has been creating different stories of its success. The film has bought up a lot to offer the audience from a love story, action, drama to a never seen before Astro-thriller. It’s the first time in the history of Indian Cinema that any movie has got such a reaction that has crashed the internet servers. 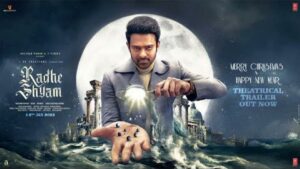 According to a report in Zee News, almost 2 lakh fans rushed to enter the Metaverse in just 3 minutes of the trailer’s launch, which caused the servers to crash. The report claims that fans not only marked their attendance in the virtual space to see the showcase of the film’s trailer, but also poured likes, and comments. For the uninitiated, Metaverse is a three-dimensional virtual ecosystem for social connections.

Directed by Radha Krishna Kumar, ‘Radhe Shyam’ a multilingual romantic-drama is set in Europe in the 1970’s and features Prabhas as Vikramaditya, who falls in love with Prerana, played by Pooja Hegde. Megastar Amitabh Bachchan has turned narrator for the Hindi version of this film.

Radhe Shyam,’ the much-anticipated romantic drama, will be released in theatres throughout the world on March 11. The excitement among fans for this film is evident, and now the producers are taking it a step further by announcing that ‘Radhe Shyam’ will be the first film in the world to allow viewers to build their own avatars in the metaverse. Never before has a film explored such a dynamic universe as metaverse, setting a new standard for the genre. Prabhas, Pooja Hedge, director Radha Krishna Kumar, producers Bhushan Kumar, Vamsi, and Pramod have attended the premiere in Mumbai. Fans hailed the teaser as the most incredible film ever made.

Ever since the makers have announced that the trailer will have its launch on the Metaverse it is trending first on Twitter. #RadheShyamOnMetaverse is the new voice echoing on the internet these days. A huge crowd of 2 lakh people has entered the Metaverse in just 3 minutes of its launch which led to the crash of the servers. The audience flooded their love in the comments section praising Prabhas and his never-dying spirit of bringing something unique every time.

To watch in the metaverse, visit http://radhesyamworld.com/. After that you have to sign-up on it with your email id. Your avatar will be created before entering the metaverse.

For this you have to give permission to the camera. Then by clicking a photo you can create your avatar. After this you will be able to enter the Radhe-Shyam virtual world. Here you will get the setup of Radhe Shyam film where you can watch its trailer. You can enjoy the trailer of the movie with the rest of the avatar.