Indie Games Gaining Ground Against The Grain In The U.S. – Statista

Indie video games are on the rise in the U.S., according to a study by market research and data analytics firm YouGov, with 17 percent of PC and console gamers playing indie labels in March 2022 compared to only 13 percent in March 2021. This is in contrast to all other gaming genres, including Massive Multiplayers like World of Warcraft, First Person Shooters like Call of Duty, and Adventure games like Red Dead Redemption, which had a lower share of gamers reporting they played them.

YouGov notes that the indie genre’s success can be attributed to a perfect storm of factors, including the growing popularity of Steam, a video game digital distribution service and storefront, which mostly offers indie games, and the progress of game engines Unity and Unreal, which have made game development more accessible. With a lower barrier of entry to the gaming industry, more lone wolf developers and small teams are able to create the games they want, whether that’s diving into a niche topic, or addressing the needs for better representation and diversity within gaming, both of which are helping to appeal to a wider range of audiences.

Meanwhile, the dip in the other gaming genres comes down to reasons like the fact that new game releases had to be pushed back over lockdown-related issues, as The Guardian reports. Even though these other game genres have seen a drop in the surveyed number of people playing them since 2021, their figures are still higher than indie games in both years, with 40 percent of PC and console gamers playing Action/Adventure and 26 percent playing Racing games in March 2022.

As this data is just a snapshot taken in the era of post-lockdown transition, it is important to note that the declines seen here are likely only temporary. Over the past years, the video game industry has skyrocketed globally, with projections by Juniper Research suggesting that the global gaming market will amount to 268.8 billion U.S. dollars annually in 2025, up from 178 billion U.S. dollars in 2021. 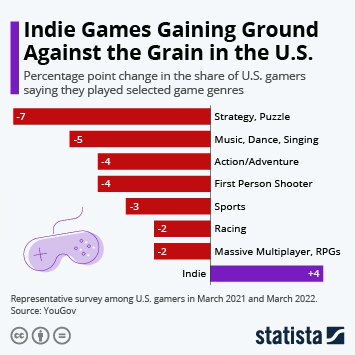 This chart shows the percentage point change in the share of U.S. gamers saying they played selected game genres in March 2021 and March 2022.

Get in touch with us quickly and easily.
We are happy to help!