The Reno Huskies played the role of giant killer last week with wins over MaxPreps Top 25 teams Hamilton (Chandler, Ariz.) and Bishop Gorman (Las Vegas). This week, Brother Rice (Chicago) took on that role as it knocked off No. 2 IMG Academy to shake up this week’s MaxPreps Top 25 high school baseball rankings.

The Midwest usually gets off to a little later start than the south, so Brother Rice was essentially seeing its first competition of the season while IMG Academy was over a month into its schedule. Nevertheless, the Crusaders edged the Ascenders 7-5 to hand IMG Academy its first loss of the season. The Crusaders’ win, coupled with a nearly as impressive victory over Tennessee powerhouse Baylor (Chattanooga) propelled Brother Rice to No. 10 while IMG Academy dropped to No. 11.

Who could play the role of giant killer this week? It might be St. Ignatius (Cleveland), which opens its season with a Florida trip where it faces No. 8 Calvary Christian (Clearwater), No. 9 Berkeley Prep (Tampa) and previously-ranked Jesuit (Tampa).

Upsets were the norm last week as Barbe (Lake Charles, La.) saw its 39-game win streak end against rival Sam Houston. The Buccaneers dropped to No. 12. Barbe had shutout Sam Houston earlier in the week.

Best game: Brother Rice def. IMG Academy, 7-5. The Crusaders won on Jack Lausch’s walk-off two-run homer in the bottom of the ninth to hand IMG Academy its first loss of the season.

Coaching Milestone: Scott Grove of The First Academy. In win over Olympia, Grove picked up his 500th career victory. The Royals have won 34 straight games.

Player of the Week: Jace LaViolette, Tompkins. The Falcons’ senior center fielder continues to come up big as he had a pair of home runs to keep Tompkins undefeated in a win over Langham Creek. Tompkins moved up to No. 5 this week.

Games to watch: Madison Ridgeland vs. Jackson Prep. Two of the top MSAIS schools in the south, Madison-Ridgeland is off to an outstanding start with only a loss to Sumrall marring its record. Jackson Prep finished in the top 25 last year and the matchup should determine superiority among the independent schools in the Mid-South.

Streaks: Roff (Okla.) saw its win streak end at 49 games in a row with a 10-6 loss to Rattan last week. With Barbe also losing to end a 39-game win streak, another Oklahoma school, Silo, takes over as the longest active streak at 37. 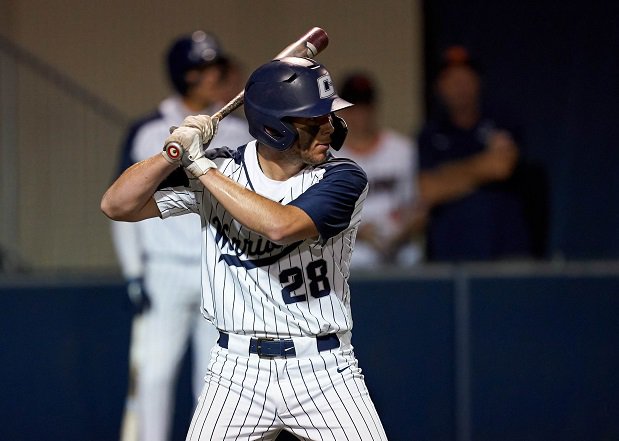