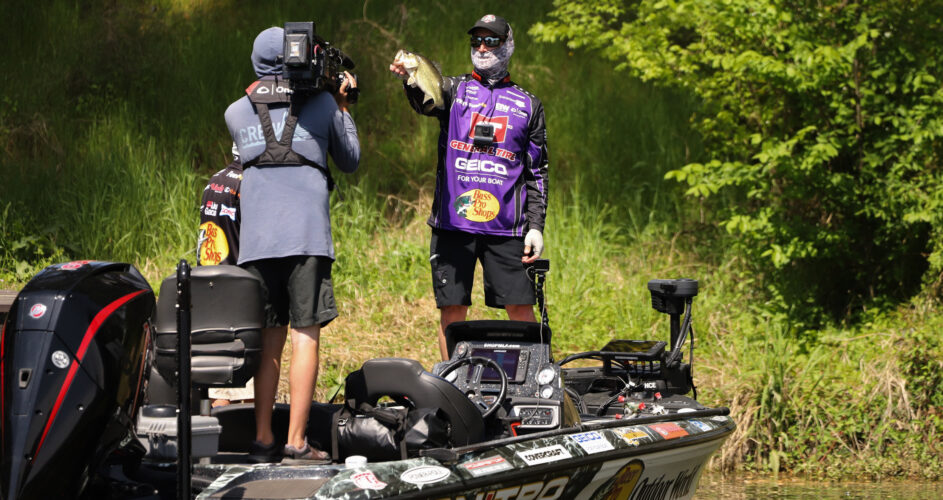 TYLER, Texas – After jumping out to an early lead on Saturday, pro Ott DeFoe of Blaine, Tennessee, put the pedal down and ran away with the Qualifying Round victory Monday for Group A at the General Tire Heavy Hitters Presented by Bass Pro Shops on Lake Palestine. DeFoe caught seven scorable bass weighing 21 pounds, 7 ounces – both high totals among the 16 anglers competing Monday – to earn the Qualifying Round win and advance directly to Thursday’s final-day Championship Round.

DeFoe’s two day total of 18 bass weighing 57 pounds even earned him the win by a 14-pound, 15-ounce margin over pro Takahiro Omori of Tokyo, Japan, who finished second in the round with 13 scorable bass good for 42 pounds, 1 ounce. Reigning REDCREST 2022 Champion Bobby Lane of Lakeland, Florida, rounded out the Top Three with a two-day total of 12 scorable bass for 36-13.

The eight anglers advancing from Group A will have a day off Tuesday, while the 16 anglers in Group B will complete their two-day Qualifying Round of competition. The Knockout Round, featuring 14 anglers competing to finish in the Top Eight, will take place on Wednesday. Thursday’s Championship Round will feature DeFoe, Tuesday’s Group B winner, and the top eight anglers from the Knockout Round competing in a final-day shootout for the top prize of $100,000 along with the $100,000 Berkley Big Bass Bonus. The six-day all-star event showcases the 32 pros that qualified from the Bass Pro Tour competing in the no-entry fee event for a purse of more than $500,000.

“Coming out today the goal was to hang onto the top spot and advance, and it feels pretty good to get that automatic bid to the Championship Round,” DeFoe said. “I had to adapt a little bit this morning – I wasn’t able to catch anything on the shad spawn. But I was able to catch some off of the beds – some I could see, some that I couldn’t – and there are a lot more fish up today than there were two days ago. So that’s really exciting.”

DeFoe said he was a “one-rod Todd” Monday, sight fishing with just one setup.

“I did catch one early on a Tokyo rig, but it was pretty much all about one rod for me, today,” DeFoe said. “Same thing I was throwing on Day 1 – a Texas-rigged Bass Pro Magnum Fin-Eke Worm. I used Sooner Run color – kind of a dark watermelon with red fleck – and fished it on my favorite setup, a Johnny Morris Platinum rod and reel with 40-pound braided line and a 17-pound (Bass Pro Shops) XPS fluorocarbon leader.

“I actually saw Alton (Jones) Jr. today in the same area, and I feel like I was catching more fish than him because I was throwing the Texas rig. I tried throwing a wacky rig, with that same exact worm, and they just don’t like that for whatever reason right now. And that’s what it looked like he was throwing. For some reason that Texas rig is absolutely getting it done. We are in Texas, so… when in Texas, right?”

Not only did Roy take home the $25,000 Berkley Big Bass Award for Group A, he also had the second-best day of the 16 anglers on the water. Roy vaulted from 10th place to inside the Top 8 and with seven bass weighing 18-15 on Monday for a two-day cumulative total of 28-10.

“It was a super good day for me – I jumped inside the cut, which was the most important thing, and earned $25,000 for the big bass,” Roy said. “This event is all about big bass. That’s what got us here, and that’s what this tournament is all about this week. I’m super thankful that my big fish from Day 1 held up.”

The Top Eight pros from Qualifying Group A that now advance to Wednesday’s Knockout Round on Lake Palestine are:

Finishing in 9th through 16th in the Group A Qualifying Round are:

Overall, there were 66 scorable bass weighing 197 pounds, 14 ounces caught by the 16 pros Monday.

Anglers will depart at 7 a.m. from the Villages Marina, located at Big Eddy Road in Flint, Texas. Anglers are allowed to trailer to any boat ramp of their choosing on Lake Palestine, but competition begins with “lines in” at 8 a.m. Each day’s General Tire Takeout will be held at the Villages Marina, beginning at 4:30 p.m. Fans are welcome to attend all launch and takeout events and also encouraged to follow the event online throughout the day on the MLF NOW! live stream and SCORETRACKER® coverage at MajorLeagueFishing.com.

Fans are encouraged to come out and celebrate with the professional anglers from the Bass Pro Tour on Thursday, April 14, starting at 3:30 p.m. at the Villages Marina, as they crown the champion of the General Tire Heavy Hitters 2022 Presented by Bass Pro Shops. The first 50 children at the event will receive a free Dora the Explorer rod and reel, and the first 50 High School Fishing anglers will receive a free Abu Garcia rod and reel combo, valued at $100. Free food will be provided for all, and the Bass Pro Tour anglers will be on hand to meet and greet fans, sign autographs, take selfies and participate in tackle giveaways.

General Tire Heavy Hitters 2022 features anglers competing with a 2-pound minimum weight requirement for a bass to be deemed scorable in the Qualifying and Knockout Rounds, but for the final day Championship Round a bass must weigh at least 3 pounds to be deemed scorable. Minimum weights are determined individually for each competition waters that the Bass Pro Tour visits, based on the productivity, bass population and anticipated average size of fish in each fishery.

To qualify for the General Tire Heavy Hitters 2022 event, the weight of an angler’s single-largest bass from each event of the seven 2021 Bass Pro Tour events was recorded. The 32 anglers with the heaviest five big-fish totals from those seven events qualified to compete in this event.

The MLF NOW! broadcast team of Chad McKee, Marty Stone and J.T. Kenney will break down the extended action on all five days of competition from 7:45 a.m. to 4:30 p.m. MLF NOW!  will be live streamed on MajorLeagueFishing.com and the MyOutdoorTV (MOTV) app.

Television coverage of the General Tire Heavy Hitters 2022 Event will be showcased across six two-hour episodes, premiering at 7 a.m. ET, July 16 and running each Saturday through Aug. 20 on the Discovery Channel. A one-hour special episode of MLF Inside Heavy Hitters will also air on CBS in late 2022. New MLF episodes premiere each Saturday morning on the Discovery Channel, with additional re-airings on the Outdoor Channel and the Sportsman Channel. Each two-hour long reality-based episode goes in-depth to break down each day of competition.