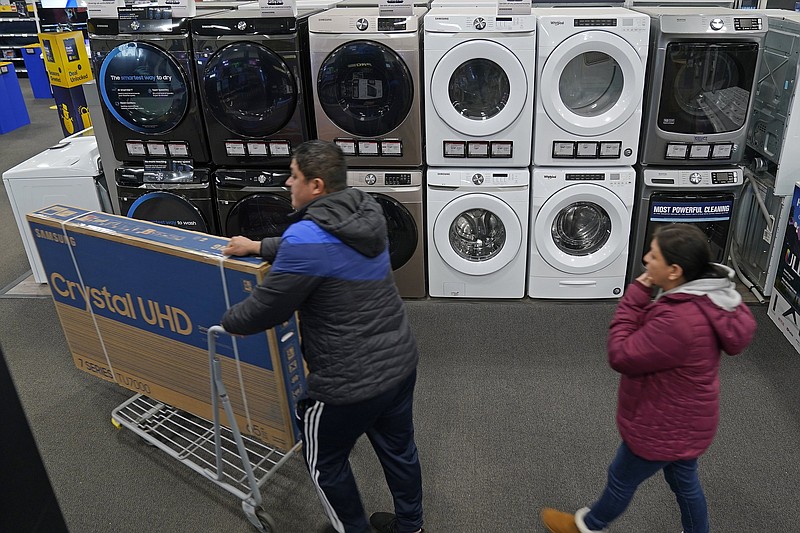 Black Friday Shopping People shop during a Black Friday sale at a Best Buy store Friday, Nov. 26, 2021, in Overland Park, Kan. Retailers are expected to usher in the unofficial start to the holiday shopping season today with bigger crowds than last year in a closer step toward normalcy. (AP Photo/

SILVER SPRING, Md. — U.S. consumer confidence bounced back in March and remains high, though consumers’ short-term outlook is not quite as rosy.

The Conference Board, a business research group, said Tuesday that its consumer confidence index — which takes into account consumers’ assessment of current conditions and their outlook for the future — rose to 107.2 in March from 105.7 in February.

The board’s present situation index, which measures consumers’ assessment of current business and labor conditions, also rose this month to 153 from 143 in February.

However, the expectations index, based on consumers’ six-month outlook for income, business and labor market conditions, declined to 76.6 from 80.8 in February. Respondents cited higher prices — particularly gasoline prices — and the war in Ukraine as the biggest factors.

The proportion of people planning to purchase homes, automobiles, and major appliances over the next six months all fell as interest rates have risen, the Conference Board said.

The Federal Reserve raised its main borrowing rate by a quarter point earlier this month, the main mechanism for fighting inflation. But many economists say the Fed’s first rate increase in three years came too late.

Two weeks ago, the government reported that inflation at the consumer level soared over the past year at its highest rate in four decades. The 7.9% price surge ranged across the economy, from food and furniture to apartment rents, airline fares and electricity.

The measure of home buying conditions in the consumer confidence report held at the lowest since November. Mortgage rates have quickly surged to the highest level in over three years.

“These headwinds are expected to persist in the short term and may potentially dampen confidence as well as cool spending further in the months ahead,” Lynn Franco, senior director of economic indicators at the Conference Board, said in a statement.

There are signs that American consumers are curtailing their spending. After beginning the year in a buying mood, Americans slowed their spending in February on gadgets, home furnishings and other discretionary items as higher prices for necessities — food, gasoline, and shelter — are cutting into any pay increases.

Retail sales increased just 0.3% last month after registering a revised 4.9% jump from December to January, fueled by wage gains, solid hiring and more money in banking accounts, according to the Commerce Department.

“Consumer confidence rose because it is heavily weighted toward job prospects, and not only are job postings plentiful, many workers are job hopping to land better pay and better benefits, especially working from home,” said economist Robert Frick with Navy Federal Credit Union.

The Labor Department reported Tuesday that there were 11.3 million available jobs last month, matching January’s figure and just below December’s record of 11.4 million. The number of Americans quitting their jobs was also historically high, at 4.4 million.

The unemployment rate is at a historically low 3.8% and some analysts expect that number to come down further when the government releases its March jobs report on Friday.

Information for this article was contributed by Jordan Yadoo of Bloomberg News (WPNS).