The Brenham City Council issued a split vote in opposition to a proposal for a subsidized apartment project at a standing-room only meeting today (Thursday). 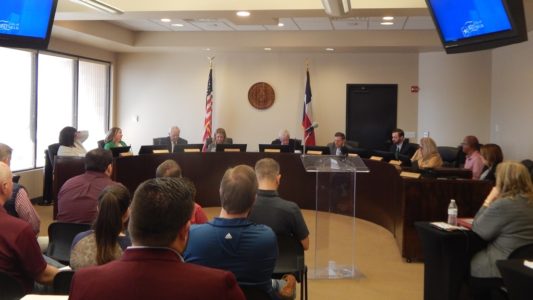 After an hour of discussion between councilmembers and comments from the public, the council voted 4-3 to reject a resolution of support for The Bluebonnet, a workforce housing community led by KCG Development that would have been located on 6.11 acres on Prairie Lea Street.  Councilmembers Shannan Canales, Leah Cook and Clint Kolby voted in favor of the item, while Atwood Kenjura, Adonna Saunders and Albert Wright were against.  Mayor Milton Tate voted “no” as the tiebreaker.

Of the 10 people who spoke, a majority voiced disapproval against allowing the project to proceed.  Many acknowledged the need for more affordable housing in Brenham, but believe that the city adding more subsidized housing is not the right step to address it.

Brannon Industrial Group President Blake Brannon, who said he is speaking as a concerned citizen, stated that developers are already in the area building homes, and will continue to do so until supply exceeds demand.

Blinn College Board Secretary Charles Moser said the College is concerned about the proximity of the development to College facilities, noting that they could cause traffic congestion and additional complications.

Ina Spokas, Vice President of Development for KCG, rhetorically asked what type of affordable housing would be considered appropriate.

Prior to public comment, several councilmembers reiterated their stances on why they either supported or opposed the development.  Kolby addressed several concerns raised to him by citizens, saying there is a demand for this type of housing and expressing the desire to provide options for working-class citizens.  Kenjura said this is not the only kind of project that can fulfill Brenham’s need for housing and echoed the concerns of Blinn College, adding he is concerned about the type of people who could move into the development and that any benefit would potentially be offset by additional burdens on Brenham ISD and the Brenham Police Department.  Wright said he felt this project would not be the best thing to move forward with, and that it would not solve all of the city’s problems right away.

Canales said everyone’s voice is important to this issue, while Cook said regardless of the vote on this project, the city has to come together to find ways to solve its housing problems.  Saunders said the council respects all of the feedback it receives and asked to not judge councilmembers based off of a singular vote.

Brenham | Washington County Economic Development Director Susan Cates said at the council’s previous meeting on the matter that the city currently has 532 subsidized housing units, but only 76 of them are not part of the Brenham Housing Authority or age-restricted to the elderly.

As Brenham has over two times the state amount of housing tax credits per capita, a resolution of support from the council was necessary for the project to proceed with funding from the Texas Department of Housing and Community Affairs (TDHCA).  Since the resolution was rejected, the state will not grant KCG funding for the development.

Also at today’s meeting, the council:

Click here to view the agenda packet for today’s meeting.