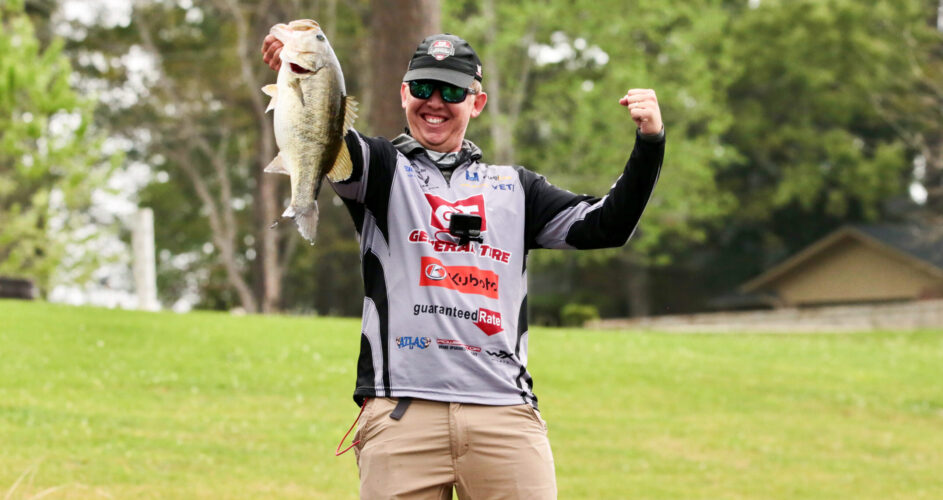 Pro Alton Jones, Jr., of Waco, Texas, caught an 8-pound, 3-ounce largemouth Wednesday afternoon on Lake Palestine – the heaviest bass of the day – to win the $50,000 Berkley Big Bass Bonus at the General Tire Heavy Hitters Presented by Bass Pro Shops on Lake Palestine. Jones, Jr. finished the day in sixth place and now earns his way into Thursday’s final-day Championship Round and a shot at the $100,000 top prize, and the $100,000 Big Bass Bonus.

“I finished in sixth place, but I feel like I won,” Jones, Jr. said. “Man, 50 grand isn’t too bad for one bite. You always hope you’re going to get that bite, and with big fish it can be a little bit of luck. But I caught the biggest and the second-biggest today, and it was just a really fun day.”

Jones, Sr. won the Heavy Hitters title last year despite not earning a Berkley Big Bass Bonus Award during the event. Jones, Jr. said his strategy tomorrow will be a little different.

“It would be cool to win that belt, but I’ve got one goal on my mind tomorrow and that’s catching the biggest bass of the day for $100,000,” he said. “It’s going to be hard to catch a bunch of 3-pounders, but if you can catch an eight or a nine, you’ll be sitting in a really good position. I’m going to treat this event like a big bass tournament – but it would be very cool to get back-to-back Heavy Hitters titles for the Jones’.

“Tomorrow we’re going have bluebird skies, light winds, and it’s going to be the best sight-fishing day we’ve had all week,” Jones, Jr. said. “It’s going to be hard for me to keep up numbers-wise, but I’m going to really try hard to put myself in front of the biggest bass on this lake and make her bite.”

Joining Jones, Jr. in the Championship Round Thursday will be pro Zack Birge of Blanchard, Oklahoma, who won Wednesday’s Knockout Round with 10 scorable bass weighing 37 pounds, 14 ounces – including an 18-pound third period.

“It was a good day. Frustrating, but good,” Birge said. “I ended up with 37 pounds, but I should have had 37 pounds this morning in the first couple of couple of hours if I just could have got them stuck. I’m just thankful I finally got a few of them pegged and got enough bites to fish tomorrow.

“Tomorrow I’ll come back out and start fresh, and hopefully we’ll stick a few more of those early-in-the-day bites,” Birge said. “It would be nice to get up 20 to 30 pounds before lunch and then continue to do what we did this afternoon. That would be perfect. If any day is going to go perfect, tomorrow is the day. I’ve got my fingers crossed – tomorrow will be better.”

The Top Eight pros from the Knockout Round that will compete in Thursday’s Championship Round on Lake Palestine are:

They’ll be joined by Qualifying Round Winners:

Eliminated from competition after the Knockout Round on Lake Palestine are:

Overall, there were 90 scorable bass weighing 301 pounds, 5 ounces caught by the 14 pros on Wednesday.

The final 10 anglers competing in Thursday’s Championship Round will depart at 7 a.m. from the Villages Marina, located at Big Eddy Road in Flint, Texas. Anglers are allowed to trailer to any boat ramp of their choosing on Lake Palestine, but competition begins with “lines in” at 8 a.m.

Fans are encouraged to come out and celebrate with the professional anglers from the Bass Pro Tour on Thursday, April 14, starting at 3:30 p.m. at the Villages Marina in Flint, Texas, as they crown the champion of the General Tire Heavy Hitters 2022 Presented by Bass Pro Shops. The first 50 children at the event will receive a free Dora the Explorer rod and reel, and the first 50 High School Fishing anglers will receive a free Abu Garcia rod and reel combo, valued at $100. Free food will be provided for all, and the Bass Pro Tour anglers will be on hand to meet and greet fans, sign autographs, take selfies and participate in tackle giveaways.

Fans are welcome to attend all launch and takeout events and also encouraged to follow the event online throughout the day on the MLF NOW! live stream and SCORETRACKER® coverage at MajorLeagueFishing.com.

The General Tire Heavy Hitters 2022 features anglers competing with a 2-pound minimum weight requirement for a bass to be deemed scorable in the Qualifying and Knockout Rounds, but for the final day Championship Round a bass must weigh at least 3 pounds to be deemed scorable. Minimum weights are determined individually for each competition waters that the Bass Pro Tour visits, based on the productivity, bass population and anticipated average size of fish in each fishery.

To qualify for the General Tire Heavy Hitters 2022 event, the weight of an angler’s single-largest bass from each of the seven 2021 Bass Pro Tour events was recorded. The 32 anglers with the heaviest five big-fish totals from those seven events qualified to compete in this event.

The MLF NOW! broadcast team of Chad McKee, Marty Stone and J.T. Kenney will break down the extended action from the Championship Round on Thursday from 7:45 a.m. to 4:30 p.m. MLF NOW! will be live streamed on MajorLeagueFishing.com and the MyOutdoorTV (MOTV) app.

Television coverage of the General Tire Heavy Hitters 2022 event will be showcased across six two-hour episodes, premiering at 7 a.m. ET, July 16 and running each Saturday through Aug. 20 on the Discovery Channel. A one-hour special episode of MLF Inside Heavy Hitters will also air on CBS in late 2022. New MLF episodes premiere each Saturday morning on the Discovery Channel, with additional re-airings on the Outdoor Channel and the Sportsman Channel. Each two-hour long reality-based episode goes in-depth to break down each day of competition.